Mobile is the 4th destination we have visited in Alabama so far, and the more we explore this state the more we enjoy it’s history, culture and people.

After spending time in Huntsville for a conference, exploring Montgomery and relaxing at the Gulf Shores and Orange Beach we were excited to see what the city of Mobile had to offer.

I’ve always liked port cities, and interestingly back in the 1800s Mobile was known as the Paris of the South when Mobile was the 10th wealthiest city in the United States, thanks to the port and the cotton trade.

Today Mobile is the twelfth busiest port in the country and said to be the hub of the entire Gulf Coast.

Where is Mobile, Alabama?

The city of Mobile is conveniently located just two hours east of New Orleans and one hour north of the beautiful Gulf Shores and Orange Beach.

We arrived in town after a few relaxing days at the Gulf Shores and Orange Beach and soon discovered that Mobile also offers a fabulous local foodie scene, plus interesting history, culture and arts.

There’s a wide variety of activities for families and people of all ages, and Mobile’s colorful downtown is thriving!

And did you know that Mobile is home to America’s Original Mardi Gras? And each year it hosts the oldest organized Carnival celebration in the United States?

We’ve done Mardi Gras in New Orleans with kids, which was amazing, now we’d love to experience the family-friendly Mardi Gras in Mobile.

Whilst we only had two days to explore, we got a good taste of what this city is about and would love to come back and take in some of it’s live music, live theater, and eat our way around the city.

Below is what we got up to.

Things to do in Mobile Al

Our first introduction to Mobile was Dauphin Street.

We drove in from Gulf Shores, found a car park on Dauphin Street, grabbed some lunch at Fountain of Youth – FOY (more on this place later) then explored the street.

Across the road from FOY is Bienville Square, a historic city park in the center of downtown Mobile. It takes up the entire block bordered by the streets of Dauphin, Saint Joseph, Saint Francis, and North Conception.

There’s a nice fountain and some benches to sit on to people watch or watch the squirrels running everywhere.

Along Dauphin Street you find numerous restaurants, cafes, bars, pubs and stores  – we didn’t venture out late with kids, but you can tell this is where it all happens in downtown.

We also enjoyed the architecture and vibrant colors. Would be great to be here during Mardi Gras! 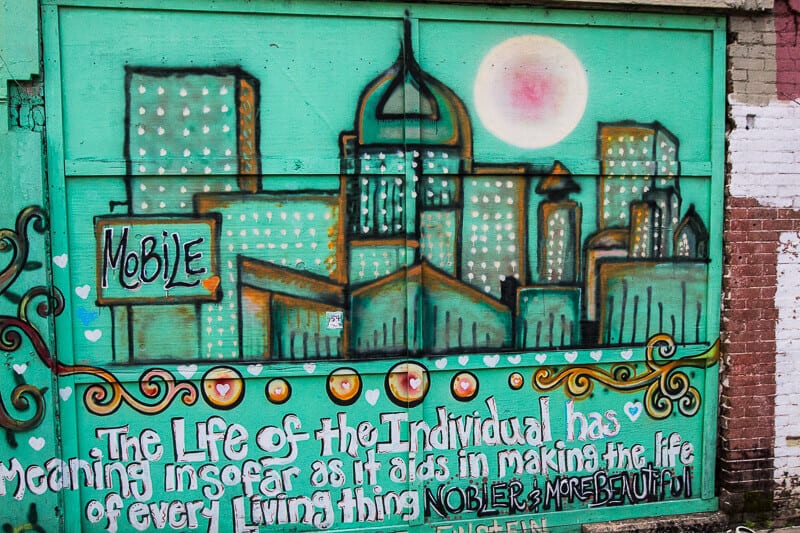 Mobile plays home to the USS Alabama Battleship and you can journey into America’s military past at one of the top South Alabama attractions.

Dating back to 1940, the USS Alabama (“Mighty A”) began her World War II adventures in the North Atlantic in 1943, then later that year, went to the South Pacific seas.

She ended up in Mobile, Alabama as a National Historic Landmark and memorial to millions. The Alabama played a key role in several battles and is one BIG ship.

You can do a self-guided tour of the Alabama following a coded map. It was the first time on a battleship for us, and it was so interesting to see all the working parts that make up a war ship.

And our really kids enjoyed exploring all the different nooks and crannies of the ship – what a different playground it was for them!

Sitting beside her in Mobile Bay is the National Historic Landmark WWII submarine USS DRUM (SS-228). The DRUM is the oldest American submarine on public display.

You can also tour the Aircraft Pavilion, Tanks & Artillery, and Park Memorials.

Battleship Memorial Park is open every day except Christmas Day.

You can buy tickets in advance through Viator

Looking for fun things to do in Mobile Al? Our kids and us always love going on these duck tours which are a combination of sightseeing on land and water.

They’re a fun and informative way to learn about a destination with passionate tour guides and the kids just love the novelty of splashing into the bay.

On this tour with Gulf Coast Ducks you’ll hear stories about all things Mobile including the USS ALABAMA, Battleship Memorial Park, Mobile Bay, the Port of Mobile, and the city of Mobile.

And, if your duck gets held up entering the bay by a goods train, like ours did, you’ll get to see historic parts of the city not normally on the tour!

Seven National Register Historic Districts make up what is known as downtown and midtown Mobile.

We love driving and walking around Historic Districts, we have one here in Raleigh, and loved exploring the Garden District in New Orleans.

Mobile’s Oakleigh Garden Historic District was certainly impressive and we spent an hour or so cruising around checking out all the beautiful and large historic southern homes.

We first came upon the Richards DAR House (Daughters of the American Revolution House Museum) during our diverted duck tour. It sounded and looked fascinating, so we returned on our own for a tour. It’s mean to be haunted so we were hoping to make some new friends.

As you can see from the outside, its striking cast-iron facade is from the Italianate style and this beautiful townhouse tells the story of Mobile during its antebellum period.

The house was built in 1860 by Captain Charles Richards, a steamboat captain, and remained in their family until 1946.

The Ideal Cement Company purchased the house from Richards’ descendants in 1946. After being turned over to the city of Mobile in 1973, it was leased to the DAR for operation as a museum.

It is said to be haunted, and little Savannah was hesitant to enter at first, but we didn’t see or hear anything, lol.

After experiencing Mardi Gras celebrations in New Orleans just a few weeks before visiting Mobile, our Carnival spirit was still on a high.

Even if you can’t visit Mobile or New Orleans during Mardi Gras, the Mobile Carnival Museum  is open all year and is totally dedicated to Mardi Gras

The museum offers 14 gallery rooms, a pictorial hallway, theater, den (social gathering area) and gift shop. In addition, the home is registered as a historic building.

We immersed ourselves more into the rich history and traditions of carnival, and looking at the the intricate designs and artistry of majestic crowns and robes of Mardi Gras monarchs.

And our kids enjoyed dressing up and pretending they were on a Mardi Gras float.

Here’s a place our kids had a chance to get creative, curious and play for a few hours.

Considering we currently homeschool our kids, any chance we get for interactive and hands on learning we jump at it.

The Gulf Coast Exploreum has been voted one of the top Alabama attractions and is a fun place for families.

It provides hands on educational opportunities in a fun learning environment with permanent and special exhibits, and an IMAX.

Plus there’s an onsite cafe and unique gift shop.

Breakfast and Beignets at Panini Petes!

Our kids fell in love with beignets in New Orleans, so they were super excited to start one of our days in Mobile with beignets at Panini Petes Cafe & Market on Dauphin Street.

Our kids rank the beignets here second only to the ones we ate at Cafe Du Monde in NOLA, so grab yourself a few hot beignets.

Eating oysters seems to be one of those things to do in Alabama, and being from Australia and growing up surrounded by fresh seafood, we love that!

We had our first taste of the famous Wintzell’s Oyster House in Montgomery and enjoyed another night in Mobile dining at Wintzell’s, a historic landmark on Dauphin Street in downtown Mobile.

It’s one of the most popular places to eat in Mobile and they’re known for their “Oysters-fried, stewed or nude”.

The interior decor is cool with lots of witty sayings, and even if you don’t like oysters in particular, there’s a wide range of other seafood options, even steaks and pasta.

They serve up some of Mobile’s classic recipes, including their famous Gumbo, and don’t miss their crab claws.

Not only is the food delicious and fresh, but the location is impressive too.

Unfortunately we arrived after sunset so couldn’t take in the beautiful views of being situated on one of the most scenic parts of Mobile Bay, so maybe book your dinner for sunset, or even take in a lunchtime view!

Another delight is the service  – super friendly and impeccable. I know, it’s what we’ve come to expect in the South but they took it to another level.

This place seemed like a real locals favorite during our lunch time visit.

Taking up prime position in the heart of Dauphin Street, Loda Bier Garten has a huge tap collection (over 100 different beers) and large screen TV’s for watching sports, and are well known for their burgers – that’s my kinda place right there!

We sat outside and enjoyed our wings, hot dogs, chicken salad, and yes I can confirm the burgers are GOOD!

Being gluten free and embracing healthy living, we seek out healthy and nutritious places to eat wherever we travel and were happy to stumble upon Fountain of Youth (FOY).

Also positioned on Dauphin Street, FOY calls themselves Mobile’s first fresh-pressed juicery and superfood bar and we enjoyed their offerings so much we went back twice in one day!

On the menu is energy bowls, healthy smoothies, wellness shots, super tacos and of course fresh pressed juices. The winner for me was their Power Paleo Pancakes!

Other places to eat in Mobile suggested by others that we didn’t get too:

Looking for coffee in Mobile?

Oh, and if you’re looking for good coffee our go too place was Serda’s Coffee Company.

Where to Stay in Mobile

We stayed in the heart of downtown Mobile at the Renaissance Mobile Riverview Plaza Hotel which is at 64 South Water Street.

This hotel is stylish and elegant without being too over the top for us and our kids and we had a lovely sunset view from our room.

It was right near the start of Dauphin Street and an easy stroll to all the spots mentioned above, including a short 5 minute walk to Bienville Square, Serda’s Coffee is a 2 minute walk away, the Exploreum Science Center is across the street and the Duck Tours is a stroll away.

Besides walking everywhere, we could easily drive to the other Alabama attractions, including a 5 minute drive to the USS Alabama.

And if you’re in town for a convention, there’s a direct connection to Mobile Convention Center via a skybridge.

It came with all our necessities including complimentary high-speed Wi-Fi, 24 hour fitness center and pool.

Planning a Trip to Mobile

Skyscanner (affiliate partner) is a comparison website that searches millions of flights. Once you find your best deal, book directly through the airline (no extra fees).

RentalCars.com (affiliate partner) is the world’s biggest car rental booking service that compares all the major brands like Hertz, Avis, Alamo, and Europcar.

Thanks to Visit Mobile for hosting our stay.

Craig Makepeace is the co-founder of yTravel Blog. He's been traveling and living around the world since 2002 and believes that life is all about accumulating memories and moments with his family, not just possessions. He's a travel addict, sports fanatic, beach lover, and passionate craft beer drinker!

This site uses Akismet to reduce spam. Learn how your comment data is processed.

G’day, we’re Caroline and Craig Makepeace. Traveling since 1997 -> 13 years with our two daughters. Sharing our expert advice on this award-winning travel blog since 2010 and proving that travel doesn’t have to stop after kids. Read More…
Scroll to Top